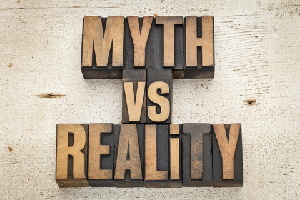 If you are currently receiving testosterone replacement therapy (TRT), or are considering this type of treatment for low testosterone, then you might be concerned about the potential effects of testosterone on your hair.

One of the most common low testosterone myths is that too much testosterone can cause balding. However, the evidence shows that whether or not you will go bald is actually determined by your genes.

The Relationship Between Testosterone and Balding

Men with male pattern baldness, which is scientifically known as androgenic alopecia, often have unusual hormone levels compared to people who do not suffer from this type of hair loss. Overall testosterone levels of testosterone are usually lower in these men, although they typically have about the same amount of a type of unbound testosterone known as dihydrotestosterone, often abbreviated to DHT.

Does this mean that testosterone is responsible for male balding? This is one of the low testosterone myths that keeps on circulating, but studies show that it is probably not true. Although DHT has been shown to shrink hair follicles, the amount of shrinkage that occurs depends primarily on the follicles’ sensitivity to DHT, rather than the amount of this chemical in the body.

Follicle sensitivity is determined by your genes. If your father went bald, then you are 2.5 times more likely to suffer from baldness yourself compared to someone whose father kept his hair. It is also possible, although slightly less likely, that you will inherit the baldness patterns of your maternal grandfather.

Why Do Men Go Bald More Often Than Women?

Many low testosterone myths arise from an observed difference between men and women. Because it is rare for women to lose their hair, many people think that balding must be caused by testosterone.

The real explanation lies in human genetic code. The gene that controls the sensitivity of hair follicles lies on the X chromosome. This gene comes in two types – known as alleles – one of which causes baldness and the other which does not. The balding allele is recessive, which means that it will not be expressed if there is a non-balding allele also present. Men only have one X chromosome, so if they inherit the baldness allele, then it will inevitably be expressed with the result that the man loses his hair. In contrast, women have two X chromosomes, so they would have to inherit two copies of the baldness allele in order to lose their hair.

What Does This Mean for Me?

The bad news is that if your father or grandfather went bald, then there is a strong chance that you will too, and there is not much that you can do to prevent it. The good news is that treating your low testosterone levels with testosterone replacement therapy will not cause you to lose your hair.