Have you been experiencing unexplained, extreme fatigue and a decreased tolerance for stress?

Those are 2 of the tell-tale symptoms of an underactive thyroid, even in men. 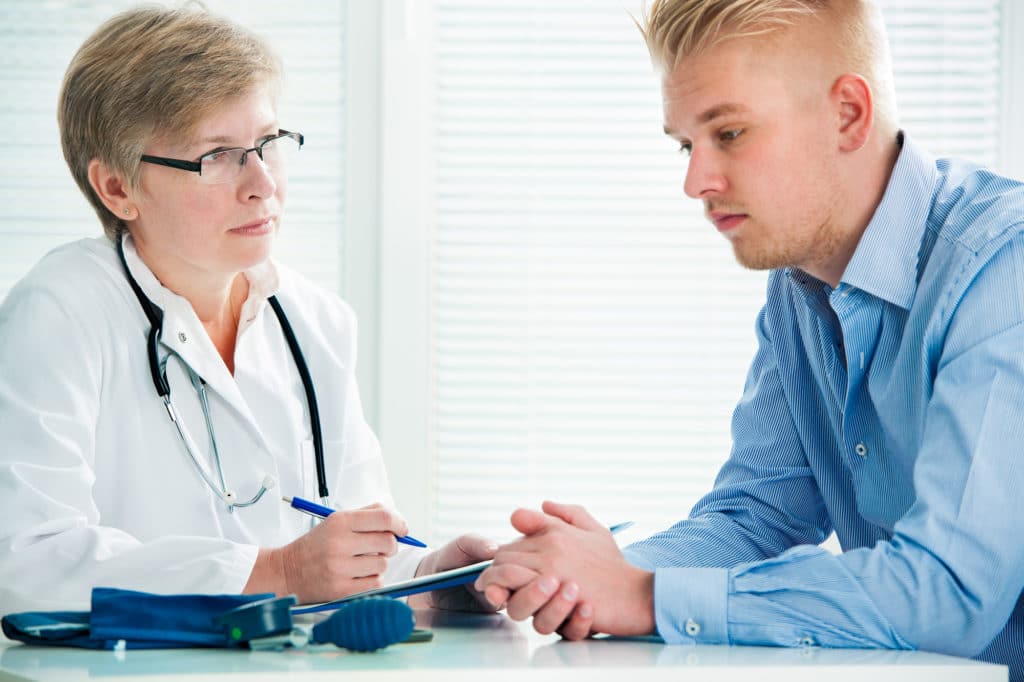 Most men wouldn’t recognize they were experiencing the symptoms of hypothyroidism. In fact, many doctors wouldn’t easily reach that conclusion, either. After all, hypothyroidism is commonly thought of as a female health problem.

There are even more common symptoms to look for that could indicate an underactive thyroid.

Hypothyroidism can often be difficult to detect.

It’s critical for the examining medical practitioner to listen very carefully to the symptoms a patient is describing. Your symptoms are what matter most, and while lab testing often supports a diagnosis, it’s not always the case that labs alone will indicate a problem.

Unfortunately, the most commonly relied upon blood tests often fail to identify the underlying markers that would indicate your thyroid is underperforming.

An experienced medical provider with suspicions based on the symptoms you report can investigate further through more specific blood work that targets subtle, yet vitally important, indicators. In that way, they can more accurately confirm or refute the presumptive diagnosis.

Your thyroid produces hormones that power many of your body’s systems — insufficient levels of these critical hormones lead to inefficient operation of your physical machinery, even though the parts themselves are in working order.

Some of the typical symptoms of low thyroid that men experience may include:

Let’s look at each of the symptoms more closely.

The hormones secreted into the bloodstream by your thyroid gland play a crucial role in regulating metabolism, which is the human body’s process for converting oxygen and food into energy.

Without sufficient levels of these hormone catalysts, our cells become inefficient at synthesizing ATP (adenosine triphosphate — the primary energy carrier in all living organisms).

Quite simply, the result of poor production of ATP is a lack of energy that you experience as severe fatigue.

Many men experience this red flag symptom as extreme drowsiness not long after having lunch, possibly compromising their ability to maintain productivity during the afternoon hours.

While extreme weight gain is rare, 5–10 pounds of added body weight may be a symptom of hypothyroidism, and there are at least 3 reasons for those physical changes.

Reduced thyroid hormone lowers your BMR, which means your body will not efficiently convert nutrients into energy. Inefficient burning of calories to produce energy by our cells leads to the excess potential energy from food being stored as adipose tissue (fat tissue).

In addition, the resulting fatigue leads to a pattern of decreasing exercise. You’re also probably not using up those excess calories like you used to.

Additionally, extra weight may also be gained due to the excess accumulation of salt and water that is common with hypothyroidism.

Keeping those 3 factors in mind, it’s no wonder that difficulty with weight gain is a common hypothyroidism symptom.

Rapid changes in thyroid hormone levels can unsettle your emotions and lead to anxiety and difficulty concentrating. Though these symptoms may vary with each person, here are some of the psychological or emotional effects patients often report:

These difficulties affect our thinking, emotions, and memory, and they can even cause some patients to worry about permanent memory loss or dementia. Thankfully, these symptoms can most likely be relieved with treatment.

Although scientists are not entirely sure of the reasons, thyroid issues, including both hypothyroidism and hyperthyroidism (overactive thyroid producing too much hormone), can affect a man’s ability to have erections.

In a 2008 article published by the Journal of Clinical Endocrinology and Metabolism, scientists reported finding a significant negative impact on the sexual health of men suffering from hypothyroidism. 79% of the men with thyroid problems suffered some form of ED (erectile dysfunction).

Many men suffering from hypothyroidism also report low sex drive (also referred to as low libido). These men still retain the ability to have sex — they don’t suffer from erectile dysfunction or other physical issues — but their normal level of desire seems to be missing.

Hypothyroidism can negatively affect both the heart and circulatory system in several ways. Low levels of thyroid hormones:

As a result, your blood pressure may rise in order to circulate blood more effectively throughout the body.

6. Reduced Quality of Hair and Skin

As a result of the decreased circulation that we just mentioned, your body reacts by pumping more blood to power its most vital organs, which occupies more of your body’s resources than usual.

As a result, blood flow to your body’s extremities is reduced, resulting in:

You may also experience diffuse thinning of the hair on your head. However, you’re more likely to experience loss of hair in other areas, such as the following:

Male pattern baldness is not a symptom of hypothyroidism or hormone imbalance — read more.

Thyroid hormones have a thermogenic role, which means they are partly responsible for the increased heat production by our cells that keeps our body temperature above that of the environment.

Simply put, if your thyroid is underperforming, your body may have trouble maintaining a proper temperature, resulting in an increased sensitivity to cold.

In addition, low thyroid hormones may affect your sympathetic nervous system (SNS), which controls how you experience sensations (like colder temperatures). Your perception of what you’re feeling may be slightly altered, resulting in an increased sensitivity to cold.

As we’ve mentioned already, hypothyroidism slows down many of the body’s systems. Digestion and elimination of bodily waste can be affected as well.

Constipation is certainly unpleasant, and it can also be one of the more embarrassing symptoms of hypothyroidism. Unfortunately, some people may end up being chronically constipated.

Diagnosis Is the First Step to Feeling Better

All of these symptoms have one thing in common: the slow-down of your body’s systems causes inefficient function that harms your quality of life.

Whether the symptoms of hypothyroidism affect how you feel or how you look, these symptoms are causing you harm.

At Testosterone Centers of Texas, we start with a thorough interview regarding the symptoms you’re experiencing, and we’ll follow up with the necessary blood work to get down to the root cause of your symptoms and devise a personalized treatment plan to restore your hormone levels to an optimum range that supports your body’s healthy function.

Get started today by scheduling a free consult at any of our 5 clinics around the DFW area — click the button to put yourself on the road to recovery from the symptoms of hypothyroidism or other hormone imbalances.