The Genetics of Male Pattern Baldness — Testosterone Isn’t the Cause

Some of the most notorious low testosterone myths center around male pattern baldness.

Is testosterone really causing men to lose the hair on their head?

What the evidence shows is pretty interesting. If you’re concerned about hair loss, you should be looking into the genetics of male pattern baldness. 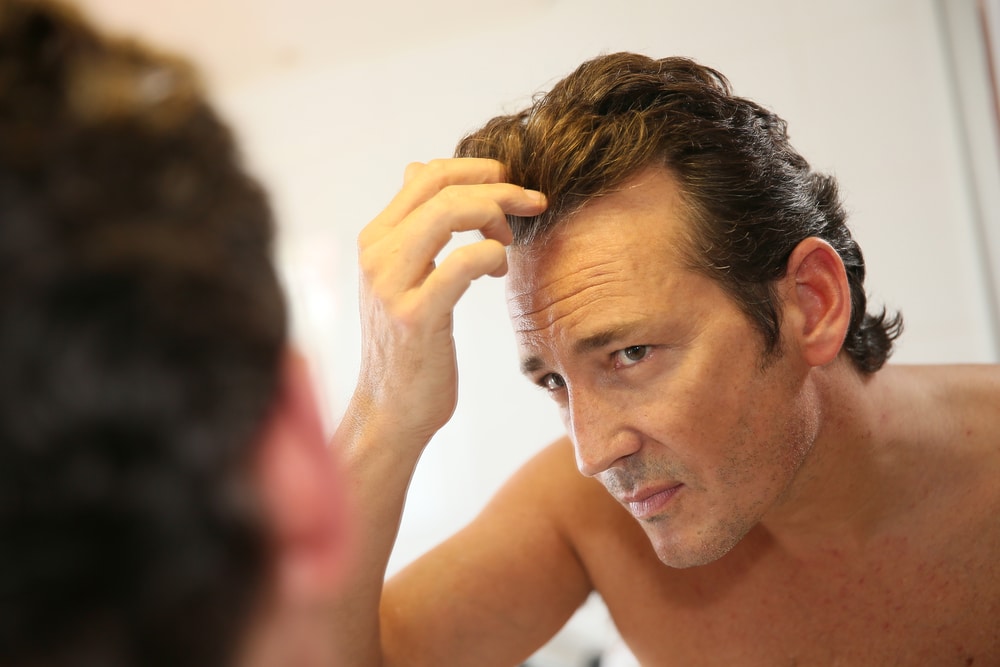 Hormones and The Genetics of Male Pattern Baldness — An Unexpected Connection

Men experiencing male pattern baldness usually have a high level of dihydrotestosterone (DHT), which is a byproduct of testosterone that has been broken down for use by the body.

DHT has been proven to shrink hair follicles, which makes it impossible for healthy hair to survive. It’s then easy to incorrectly conclude that it’s the amount of DHT circulating in the system that’s causing the shrinkage of hair follicles and subsequent hair loss.

Male (and female) pattern baldness is actually the result of DHT acting under a specific set of genetic conditions.

Some men are genetically predisposed to developing hair follicles that react strongly and negatively to the presence of DHT. Their follicles have an increased number of receptors that allow DHT to bind to them and cause the follicles to constrict.

Hair loss is almost entirely determined by this genetic increase in the number of receptors, not on the amount of DHT in men’s systems.

The catch is that only men with this specific genetic increase in receptors have this reaction and lose their hair.

Genetics of Male Pattern Baldness — Why Are Men More Susceptible Than Women?

The gene that determines DHT sensitivity is found on the female X chromosome.

On the other hand, women have two X chromosomes and no Y chromosome. That means that they get a second chance. Both X chromosomes would have to possess the sensitivity gene, which is a rare occurrence.

It’s that most basic genetic makeup, XY for men and XX for women, that sets up a relatively high statistical occurrence of baldness in men, but a low occurrence in women.

Most testosterone myths have developed as a result of observing differences between men and women, and people assumed the natural differences in testosterone levels was the determining factor.

That’s simply not true in the case of male pattern baldness.

Hair Loss and Low Testosterone — One Connection You Should Watch For

After having said all of that about genetics determining male hair loss, there is a different kind of hair loss you should keep an eye on: Thinning body and facial hair (one of the more common signs of low testosterone).

If you’ve found that your beard is thinning or that you’re losing body hair, it could be a symptom of low testosterone.

(Read more about the many symptoms of low testosterone here.)

The Genetic Link to Male Pattern Baldness — The Upside

There’s a definite positive conclusion to be drawn from all of this information: If you’re suffering from low testosterone and currently have a full head of hair, the supplemental testosterone injections used for testosterone replacement therapy (TRT) won’t suddenly cause you to develop male pattern baldness.

That means you can utilize the benefits of a regimented TRT plan that has the potential to restore your quality of life and help you feel like yourself again, all without the fear of suddenly losing your full head of hair.

If you still have questions regarding the genetics of male pattern baldness, or if you would like to learn more about the role of hormones in hair loss, we invite you to check out some further information we have available on the subject — click the button to learn more.

Glenn Steponaitis, PA-C began his healthcare career nearly 20 years ago as a medical technician at Seton Medical Center while concurrently earning a Bachelor of Arts degree in Biology at the University of Texas in Austin.   His interest in medicine lead him down the path of becoming a certified Physician Assistant and achieving a Bachelor of Science degree in this field from the University of Texas Southwestern Medical Center at Dallas.   Following completion of his schooling, Glenn started a 10 year career in the field of Gastroenterology and Hepatology, and in 2010 he began focusing on the medical management of those suffering from symptoms caused by low testosterone after witnessing hormone replacement doctors help Low T sufferers.