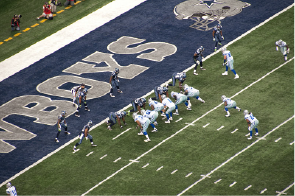 The NFL Season has begun and you’re eager to watch your team fight for victory.

Nothing compares to that rush you get when your football team plays well and earns a triumphant win.

However, unless you’re lucky enough that your favorite team is undefeated all season, there comes will come a day when they lose a game.

The agony of defeat is devastating to more than just your pride, it actually affects you physically. When your team plays poorly and loses it can actually lead to low testosterone.

After reading that last sentence, you may be staring at the screen in utter disbelief and denial with your mouth hanging open, rolling your eyes, laughing it off as nonsense, or a mixture of all those.

You want facts that support such a claim, you demand them! The last thing you need is one more reason to stress over your team losing a game.

Isn’t it bad enough that the playoffs  and your fantasy football team dreams are in jeopardy when your team loses? The idea of a loss by your favorite NFL team creating low testosterone levels just seems cruel. Unfortunately, it may be cruel, but it is in fact true.

A study conducted by a graduate student at the University of Utah found that testosterone levels rise in the fans of winning teams.

Just watching your favorite sports team compete stimulates testosterone surges similar to those experienced by the players themselves.

The effect is even more positive when your team wins. You receive many of the testosterone boosting benefits of an NFL player without the risk of injury, so it really is a winning situation.

If you’re an extremely loyal fan, you can experience a rise in testosterone simply by anticipating an upcoming game.

On the opposite end of the spectrum are the effects of your team losing a game.

Even being a half-hearted fan instead of a die-hard loyal can lower your testosterone. During a normal day, your testosterone levels peak shortly after you wake up and decrease as the day goes on.

Add into that equation watching a game where your team loses and your testosterone sinks lower than your basement “man cave.”

The specifics of this phenomenon

The University of Utah study collected samples from men before and after they watched a game in which their favorite team played.

That much of an increase after a win actually counteracts the daily testosterone decrease.

It was concluded that the effect was sudden and not one built up by anticipation of a win during the game because the score was so close and came down to the wire.

What this all means

Low testosterone is a very real condition and while watching your team win can increase your testosterone, it isn’t a permanent solution. No team can win forever.

Placing that much more emphasis on your team’s performance can lead to unnecessary physical and emotional stress which isn’t good for your overall health.

A better course of action is to just enjoy watching your NFL team for the sport of it and the sense of friendly competition. Whatever reaction it causes in your body happens regardless.

Learn more about Low T, its symptoms, its causes, and potential treatments, here.